Well, we are about an hour and a half from Los Angeles, on Wednesday again. I went to sleep about 10:30pm on Wednesday evening, and now it’s 8:30am on Wednesday morning. I watched two good movies on the little movie screens built into the seats: The Fugitive, and Sleepless in Seattle. The screens are little LCD screens, about 6″ across, that run nine different movies over and over again, so you can watch one at just about any time.

I slept as well as can be expected on a plane, which is to say very little. Now we have an hour and 38 minutes left in this flight, followed by the rest of the day going to Dallas, and finally to Denver. I get the feeling I’ll be slightly exhausted by the time I get home.

I better do this before I forget. LAX to Dallas was rather uneventful, with two exceptions: Dennis Hopper was on the plane with us, and for some reason, sat in coach seats with his entourage; and some rock star with his scantily clad girlfriend were on the flight as well. I was far too tired at this point to really worry about it. 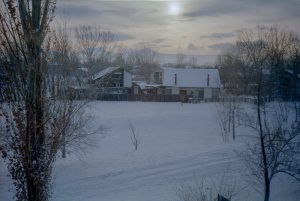 I made the connection at DFW on time, but the airplane wasn’t. Apparently they replaced some part of the cockpit computer, and had to re-test everything. We left about an hour late. The pilot came on as we got up into the air and said that our flying time to Denver would be about two hours, and the weather in Denver was clear, with light winds and the temperature of about -4 degrees. I didn’t realize that he was talking about Fahrenheit! About this time, I decided that I should try to find a jacket, if I even remembered to bring one. It was definitely cold when I got home. There was about 3 inches of snow every, crystal clear, and felt much colder than -4F.